These Wild New Skyscrapers Are Building Forests in the Sky

We were just getting used to green roofs—those fascinating combinations of garden and architecture. But now two architects working at opposite ends of the globe are planning even more incredible feats by designing farms and forests designed to live on the face of a skyscraper.

One of the most dramatic of these new urbanized farm projects is the Urban Skyfarm currently under design by Brooklyn-based Aprilli Design Studio for a site in Seoul, South Korea. This prototype building project uses four major tree-based components—the “root,” “trunk,” “branch,” and “leaves” —to house more than 24 acres of space for growing fruit trees, tomatoes, and other sustainable vegetation. The trunk of the tree is intended to contain an indoor hydroponic farm for greens, while the root portion provides a wide environmentally controlled space for market places and public activities. 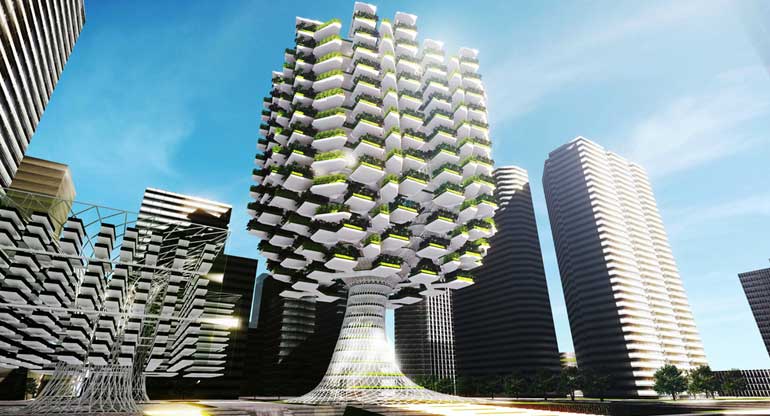 Meanwhile, turbines at the top of the tower provide enough energy to power the whole operation in a net-zero environment. The design also can capture rainwater and filter it through an artificial wetland before returning fresh water to the nearby Cheonggyecheon stream. Architects Steve Lee and See Yoon Park say the structure could support hundreds of environmental functions and serve as a model for how buildings are designed, constructed, and utilized in the future.

“Our version of the vertical farm was intended to become an independent, open-to-air structure which would be purely focusing on farming activities and sustainable functions such as generating renewable energy and performing air and water filtration,” the architects told Fast Company.

“With the support of hydroponic farming technology, the space could efficiently host more than 5,000 fruit trees. Vertical farming is more than an issue of economical feasibility, since it can provide more trees than average urban parks, helping resolve urban environmental issues such as air pollution, water run-off, and heat island effects, and bringing back balance to the urban ecology.”

Mimicking the biological structure of a tree lends the design many structural and environmental advantages by creating a lightweight but efficient space to host different farming activities. Its designers also attest that the form creates a strong iconic image and represents a symbol of well-being and sustainable development.

On the other side of the world, a wildly innovative Italian architect is plotting to apply greenery to the world’s most innovative buildings, including an already constructed project in Milan that has been named one of the the best tall buildings in the world.

The designer and architect is Stefano Boeri, and the dual skyscraper project in Milan is Bosco Verticale. His 256-foot and 344-foot towers are swaddled in more than 700 trees and 100 species of plants. In total, there are around 21,000 plants on the two towers, equivalent to five acres of forest spread over 1,300 square meters. It even has its own natural ecosystem with more than 20 species of birds nesting between the two towers. The design really is “green” in more than color only. The massive amounts of plant life help reduce smog and carbon dioxide, dampen noise levels, boost oxygen, and regulate heat and cold within the twin towers. Inside, a sophisticated irrigation system redirects used water back onto the forested “porches” to sustain the plant life.

“It is a model for vertical densification of nature within the city,” Boeri says. “Vertical Forest increases biodiversity, so it becomes both a magnet for and a symbol of the spontaneous re-colonization of the city by vegetation and animal life.”

Milan’s Bosco Verticale is far from Boeri’s singular vision, and is just one of a host of projects around the world that are using urbanized vegetation to make life better for the people who live and work in these buildings.

Boeri has already unveiled plans for two Vertical Forests in Nanjing, China, as well as “Liuzhou Forest City” in China, the Wonderwoods residential apartment project in the Netherlands, and the sprawling Guizhou Mountain Forest Hotel in Southern China. He also recently announced a 36-story tower in Lausanne, Switzerland, where “Tower of Cedars” will feature more than 18,000 plants and 100 trees. “It’s something I’d been thinking about for a long time,” Boeri said recently. “I’ve always been fascinated by trees and architecture. In Lucca, Italy, there’s a 14th-century tower that has trees at the top. So I started to imagine how trees could become the main protagonist on a building’s facade.”

Boeri isn’t the only one thinking about how to build forests and gardens in the sky. His innovative, arboreal designs are inspiring and complementing other greenery-inspired architectural projects around the globe.

Back in Asia, Vo Trang Nghia Architects are building a city complex in Ho Chi Minh City that will feature a 90,000-square-foot project with a communal rooftop garden. They’re also building a tree-lined campus at FPT University that will spread an elevated forest over the 14-square-mile site.

One Central Park in Sydney, Australia, hosts more than 190 plant species native to the country and features massive crawling vines that climb the building’s face.

Some critics have doubted the scientific veracity of the tree-building concepts, not to mention the aesthetics of simply propping a tree onto a concept drawing, but these innovative designers seem to be using green technology in a manner that is both ethically and tactically responsible.

Besides, some people just can’t see the forest through the trees.

While most people know about window films' ability to extend windows' life, reduce glare and lower air conditioning costs, they offer some crucial safety benefits, too. By retaining shattered glass...